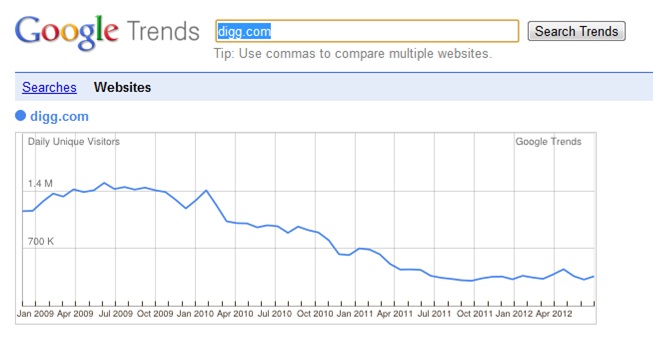 Almost four years ago I wrote about how you should be thinking about getting your content noticed on Digg, how it all worked and what you should be doing to get yourself up the top. I’m half tempted to delete the post now, because Digg has gone on a long tumble down to the depths of the oceans. At the time of the post, late 2008, Digg was just about to reach its peak.

It was an odd time in the world of social bookmarking. Digg had overtaken Slashdot in the rankings and it was now called the Digg effect when websites went down due to spikes in traffic from social bookmarking sites. In February 2009 Slate ran an article proclaiming MrBabyMan, the site’s biggest power user, as the King of all social media.

As much as MrBabyMan wished it all wouldn’t end, it sadly did come to a rather abrupt end. In 2008 Google was negotiating with Digg to purchase the company for $200m, in 2012 the company was split up and the website, brand and technology were sold for $500k (Washington Post paid $12m for the Digg staff whilst Linkedin paid $4m for a suite of patents).

In between those two events it all went badly wrong. Firstly Facebook Connect link to Digg in 2009 and failed to increase the users of both of the websites in the way that it was anticipated. Facebook is still looking to find a way for people to easily share and vote on stories on their site even now. Then in 2010, whilst still struggling for a profitable business model, Digg decided to put the publishers at the heart of their new redesign, rather than the users. Digg version 4.0 was a disaster.

Version 4.0 was critically panned because it took a concept whereby the users decided what was top of the news and replaced it with one where publishers did. They killed the community spirit entirely. Power users such as MrBabyMan had suddenly lost all power they had to big Publishers who were auto submitting all their stories.

It was the start of the decline that you can see in that graph above and it is no surprise that CEO Kevin Rose cut his losses in 2012. In mid 2011 Reddit overtook Digg as the social bookmarking site of the masses.

On August 1st 2012 after being sold to betaworks and six weeks after reworking the site from scratch, version 1 of the site was relaunched. Oh dear, as Dan Barker said on Google Plus, they seem to have made a big mistake. Alexa would imply that they have not been having a good time since relaunch, with figures dropping from a global reach percentage of 1% in 2010 to about 0.2% in the last week. So where have the big drops come from? Why is the new Digg performing so poorly?

1. No longer indexed in Google

Digg used to have 14 million urls indexed in Google. Every submission had its own url, every user had their own url and there was lots of original content on the site that could be found. It is now down to 9 million and that will be even fewer soon. Why? Because the submission pages that the users used to vote on now just redirect around to the story. Digg has no ability for users to comment on the articles on its site – you have to do it on Facebook or Twitter. If Reddit has taught us anything it is that you have to give the user the ability to comment on the articles on the site. It doesn’t matter if they don’t know each other.

Of course if there is no ability to log in without going through Facebook or Twitter, then there is no need for any user pages, so they all now point to a 404 error page (which in itself is a development because before they were just linking to a non-branded page that said ‘404’). It’s one of the first things that you do when you’re changing a website – work out where to redirect your urls to. If there is only one page, redirect to it, not to a 404 page.

If submitting through Twitter and Facebook wasn’t bad enough, Digg have removed the reason to visit their website. The stories linked to through Digg just redirect around to the page that the person is ‘Digging’ effectively they are giving Twitter and Facebook a method of having voting on their sites for free, without the discomfort of having to pay someone to do it or having a bizarre intermediate site that the users have to go to before they get to the article they are talking about.

The old Digg I always thought had really rubbish categories. But at least they had some (even if I’m not sure what thought had been put into them). In the new world there is no way for me to filter my Digg list to just the stuff that I’m interested in. Most of it is US centric, which is fine when we’re looking at technology, ‘big data’ or infographics. I even have a passing interest in US politics, but not enough that I want my link aggregator to have hundreds of links about politics, insurance, ‘football’, etc. Either give me category pages or give me the ability to filter.

We wondered how Bit.ly were ever going to make their millions in the redirection world and it turns out that they are trying to do it by offering ‘Enterprise’ services (allowing you to do a redirection through your own domain and getting others to do so too. How is Digg going to manage this? I can’t see The New York Times paying Bit.ly and Digg to do the same thing. Are they going to start articificially promoting stories again based on publishers paying them (that didn’t work out well last time, did it?)?

To me, it feels like they’ve looked at the Reddit model where they have large numbers of users, make little out of online advertising, but also expend little by having few developers and other staff. They’ve looked at it and decided that it doesn’t scale to big money, so they’re going to see if they can come up with another one. I think they need to work it out quickly though. Maybe in the meantime they should go back to the online advertising model and try and get people to look at the site again by solving those problems above.