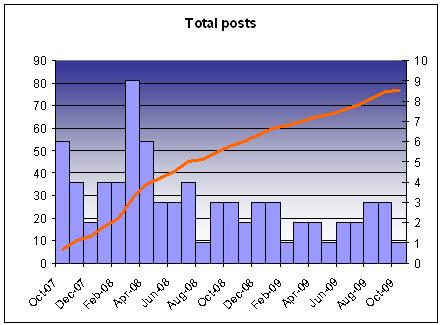 Oh I hate doing these posts every so often about my website and what’s been happening on it.  But then it comes around and I realise that I posted first on this blog just over two years ago, so I suppose I’d better write one of those posts that says exactly what has been going on in the last two years and how my blog posting has changed.  This is probably only really interesting for me and the odd other person who has blogged for a while and also keeps tabs on how many people look at their posts.  And of course I’m sure there are some n00bs out there who are wondering whether they should write a blog or not.

Just in case you were wondering – I first did this type of post in April 2008 when I was about to put Gatineau on my blog and wanted to do a baseline.  Then around about this point last year, I wrote the 50th post on the blog and it was almost a year in and I was quite pleased with how it was all going.  Then at the beginning of the year I wrote another one and reviewed the full calendar year’s progress on the blog.  Funnily enough, I did another one when I realised that my traffic was going down a little bit, but it wasn’t quite the same.

I suppose the first thing that you will probably notice is that this time last year I had written 50 posts (one year in) and this time around I’m only on post number 78 (this one).  That suggests that I’ve slowed down a little.  It’s not quite as simple as that though: As you can see from the graph attached there are three months when there were a large number of posts.  The first month (and if I’m going to give any advice to anyone on this one – make sure you have lots of posts to start with before you go live – that way you have a bit of a running start), I’d pre written all six of those on the companies internal blog system and released them into the wild to get a better audience on them.

Then there is March 08 when I wrote 9 posts.  Except I didn’t, in that month I had a lot of assistance from Kate Duffy who guest posted from SES in New York.  Then that was followed up by April, in which I wrote twice on the fly because of unusual events.  Notably I had to create some sort of scent on the blog when I got on the front page of Slashdot and had to write a follow up myself.  Then I attended the Omniture Summit and wrote up my findings from my couple of days there.

Suddenly it looks a lot better, doesn’t it?  Those fifty posts consisted of six pre written and six written by someone else.  So instead of writing 50 in a year, actually it was only 38, so the 28 in the last year is much more comprehendible.  Although, that doesn’t mean to say I shouldn’t write more frequently. So here are the headline figures:

That’s for the whole two years, but it is quite good.  If you want a bit of one upmanship to go on, I’ll tell you which countries are the most popular as well:

Thanks guys from all those countries (101 different countries looking at the blog!).

It’s hardly surprising that there are some older posts in there, because they’ve been there longer and had more chance to get promoted in rankings and had more time to accumulate visits.

Maybe I need to spend a bit more time looking at how I can attempt to get more traffic from search engines.  I suppose one of the things I could do is write more generalised posts (“Funnel Analysis” is my top keyword from Google) that fit across several different niches, rather than the large volume that I write about specific systems.

Interestingly my direct traffic has been quite inconsistent.  I suspect that this is partly to do with the way that I promote myself and my blog.  Whilst finishing my last job (end of 2008) I was pushing it out quite frequently in presentations and in analysis so that I could get my company a bit more focused.  In my current job there are far fewer internal stakeholders and many more Government departments who frequently won’t have the skills, inclination or even time to look up the things that I am promoting.

And finally, but not least, here are the number of referring sites that have sent me traffic.  These are usually fairly inconsistent and I think the ones that should get noteworthy mentions (beyond the previous posts I’ve written) are Twitter (@whencanistop), UserPathways (thanks James) and of course Web Analytics Demystified (which I try to post comments on frequently).

I suppose I should probably try and promote my blog elsewhere through comments on blogs and pushing it on forums, but it feels a little bit tacky – like I’m promoting myself rather than the content of my blog.  I suppose I am really, because that is what the blog is supposed to do anyway.

2 Comments on “Two years of WhenCanIStop”