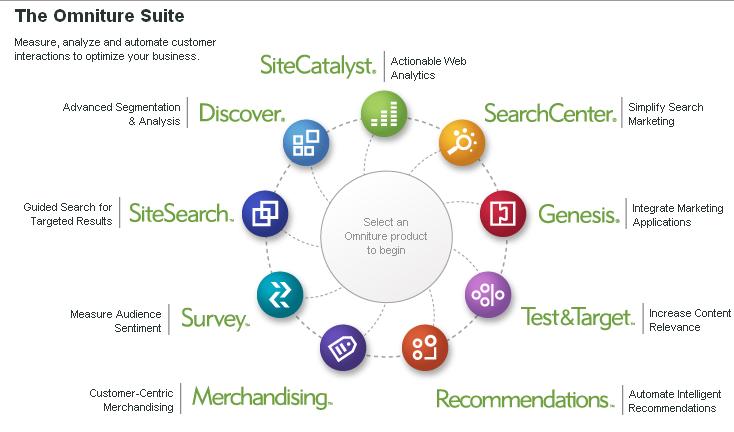 Whoa, you got that right.  Holy Cow was how one twitter post put it.  The whole Omniture hashtag on Twitter went mental over it.  I wonder if it will hit a trending topic.  Obviously the timing for us here in the UK is a bit crappy, because it is 10 in the evening and I’ve just finished writing a blog post (how inconsiderate – if they’d announced this a couple of hours earlier then I could have written about that instead of having to write two in one night).  Obviously with the whole scent thing that is going on, I’ve had to write a second one in one night.  Which is a bit much for me.

Maybe some back story might make a bit more sense here – back in November 2007 (less than two years ago) Omniture bought out Visual Sciences in a deal that was reported at almost $400m.  That seemed like a lot of money at the time (and of course Webtrends were furious because they thought that Omniture were going to buy them).  Did we wonder at the time why they were doing it – was it a land grab of clients so that they could build up a base and sell out as soon as possible?  It was certainly seen like that in some quarters – CNET reports that they only take about $300m in revenue in any particular year and I’m fairly sure their overheads mean that little of that is profit.

To include the rest of the back story – whilst HBX was consumed by Omniture, it still exists in many places and so it will be interesting to see what happens with the tool.  Microsoft Analytics arrived at a similar time to the HBX take over, but has since completely disappeared.  Added to that fact that Google has a long running free tool that many bloggers, including this one, use.  It adds value to itself by integrating into adwords in an attempt to get users to spend more money on adwords (it’d be interesting to know if anyone at Google had ever worked out if they did).  And then finally Yahoo! got in on the action by buying and then releasing for free to a those who could get it Index Tools.

But what about the current deal?  Where does it fit in?  It all looks a little odd to me.  Whilst Omniture has many different products, none of them really fit into what Adobe do.  I know Adobe does have options on web design and rich internet applications, but Omniture has consistently sold itself on its Marketing capabilities, rather than on its ability to link into web design processes and internet applications.  Plus, do Adobe really make any money out of Flash?  I don’t think so – if it is simply to come up with options to encourage people to design in it so that they can measure more effectively, then it’s not going to make them any more money. Where does Adobe fit in here?

So does this lead us onto the same thought as Omniture had almost two years ago?  Lets make a big product, get as many clients as possible and then sell it on to some other mug for a massive profit who think having many clients equals long term profit?  It doesn’t appear to have worked so far.  According to Seeking Alpha there was a Net Loss last year (2008) of $44.8m, admittedly based on a $297m revenue.  But that is still a big loss.  The only way you could ever make money on this kind of deal is hope that you can double revenues (probably doubling Net Loss in the same process) and then sell the company on for more money than you bough it for.

Maybe what has actually gone on here is that Adobe has made the age old error of mistaking web analytics software for something that gives you insight into what the users do, when actually the web analysts using the software are the ones that give that insight.  Linking this in with any Design software tools won’t work unless you have have the appropriate people there who are able to translate numbers into recommendations that the designers can take on.

What I’m going to be doing in the next couple of weeks is keeping an eye on what the blogs are saying about Omniture – I am sure there are a load of insiders that know more about this than I do.