How Publishers Could Do Micropayments 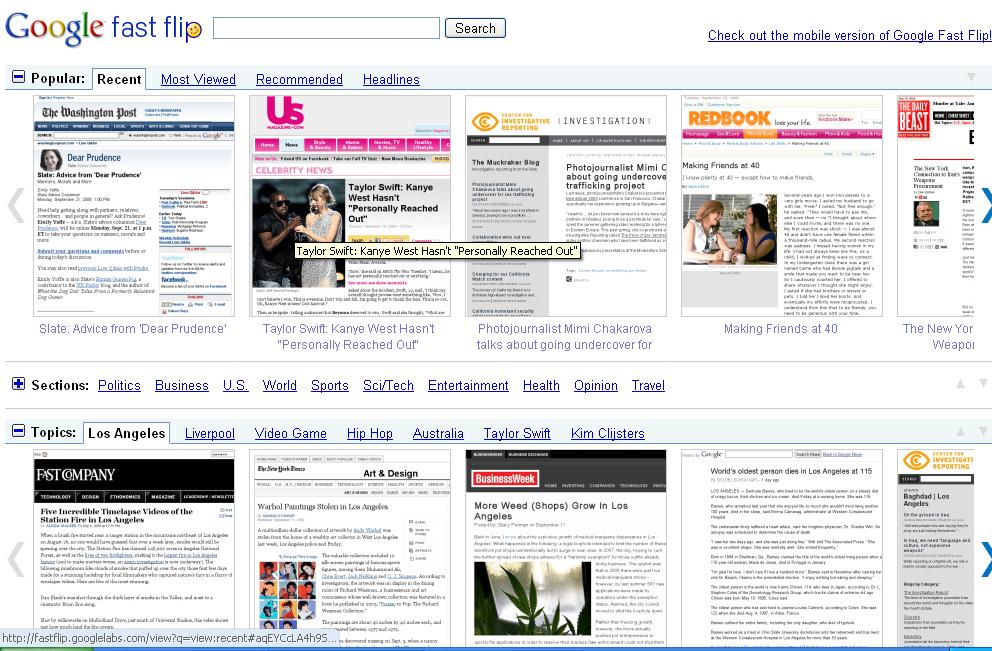 I’ve been thinking recently about how Publishers should set up their paid for model (given that News International have said they are going to do it).  Last time I wrote about it I was trying to work out if he would go for fully behind a pay wall or the freemium model.  But suddenly Google have done something strange.  They’ve come up with something in Googlelabs called fastflip. What is fastflip?  Well it is something that Google have just put into Beta which is going to allow you to flip through news articles on the web.  You can add in bits of information to filter your content to allow just certain topics to appear.  It’s a bit like Google news, but with a shot of the page to allow you to see what it looks like (but not clear enough to actually read it).

What has been said so far about it?  The Guardian says that Publishers are very happy with it (even if not very many of them are on the beta as yet).  ComputerWorld is excited about the possibilities in terms of sharing content with other users and being able to filter content.  Predictably the times talks about how this is another attempt by Google to make money out of publishers for content they didn’t create (which I suppose I am too by linking to the article).

But they seem to have missed a point:  Yes Google may put advertising around the pictures and make money out of something they didn’t create, but they do that anyway with adwords and everyone bar the Publishing industry thinks that is good (especially those that actually sell something on their websites); Yes it is exciting in terms of sharing content around to your friends in a different way;  Yes it is just a pretty version of Google News.

But think about it this way – if you are going to hide your content behind a pay wall you will probably lose money because Google won’t index your content and people won’t find your content to be able to buy it (unless, bizarrely you use adwords to get users to pay Google for content that they didn’t create – can you see where I am going with this one) – so you’ll be limited to solely people who already know about you.

How could you get around this – if you could persuade Google to keep your content indexed, but tell the users that they will have to pay to get onto the site for content.  This is the micropayments model whereby you pay per bit of content that you look at.  The real trouble with micropayments is that you won’t do it if it is difficult and you don’t really know the site.  How could you make it easier?  You could do it through Google, but then you’d have to pay Google some money.

Is this where the fastflip comes in?  Google still indexes the content in fastflip for those that want to use it.  You get to see a picture of the page to lure you in to want to see it.  Google tells you that you have to pay £0.10, but you can do it through your Google account really easily just by saying ‘Yes – do it’ when it prompts you.  Google then gives seven pence to the publisher, to thank them for persuading a user to sign through.  This gives the publishers a really good micropayments methodology that they still get 70% of the cash for, they still get indexed in Google and get traffic and Google is happy because they are making profit out of you hiding your content behind a pay wall.

Will it work?  It’s debatable – because you’re reliant on all sites doing it.  Anyone who sticks with the current model will inevitably win this one because they’ll have fewer competitors and so they’ll get more people from search.  They’ll also pick up those that just plain object to paying for something that they could get for free.  But it could just add that extra bit of impetus to those publishers who are keen on going down the route of making the consumers pay for the content.

The real question is – if you are going to use Google as you option for setting up a micropayments system, where does that leave Microsoft and Yahoo!  They could badly miss out on this one.  In this country (the UK) Google already have 90% of the search traffic, imagine if they created a micropayments system – who would bother using Bing or Yahoo!?  Only people who didn’t actually realise they were.  If Microsoft are going to get through this one they need to think about what they are going to do and they need to think about it fast.

And this is what they are doing – they have introduced Visual search.  As Techradar says – you have to pretend you are in the US for the moment, but that is also true of flipfast.  Unusually for Microsoft, they appear to have decided to do something without really thinking about how they can make money off it.  I think they should be thinking of using this technology in a similar way to Google to help users look at news pages that are hidden behind a pay wall.  I suppose the real question is – can someone come up with a quick an easy way of doing the micropayments and sign up the publishers quickly.  For me there is enough animosity between New International and Google, for Microsoft to come in and make this relationship work.  How will they get market share for Bing – this could possibly be the model.