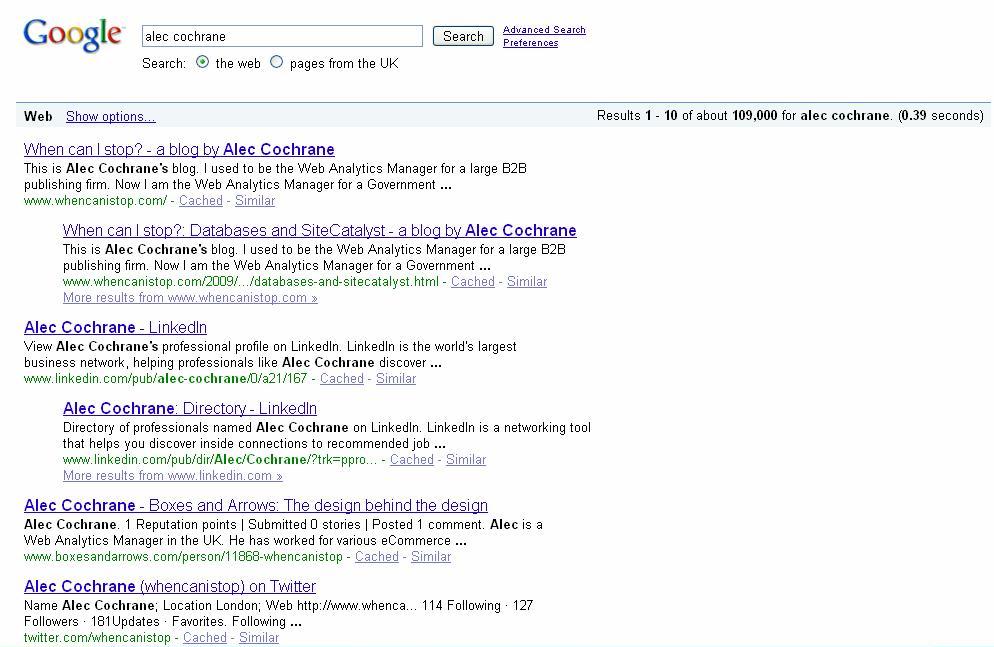 Well if James can declare that Usability is dead, surely I can declare that web analytics is dead.  In fact, this whole point is quite interesting and will actually have some real impact in where we are going and what we are doing.  So lets start at the top shall we – why does James think that Usability is dead and what does that mean for Web analytics?

In the old days we used to say that Content was king.  Even Wikipedia has got in on the act.  Search Engine Watch said that it is the golden rule of SEO.  The reason being that if you didn’t have any content, there was no way that anyone would ever be able to find your site (certainly not through a search engine) and then you wouldn’t get any visitors.  And even if you did get some, if it wasn’t original, well written, etc then the users wouldn’t stay.

James argues in his article that this is no longer as true as it once was and now the key focus should be on context.  Whilst he doesn’t necessarily say this in his articles, he is pointing to the fact that many websites have been gasping for visitors when what they are actually looking for is valuable visitors.  Companies that sell things have long realised this and have been making more and more use of their analytics to be able to increase their ROI on their marketing spend.  Don’t forget about the good old SEO though – this is very important for companies who sell things – and even unpaid inbound links. For me personally though, a good example of context could come when you Google my name.  In this country (as you can see from my unpersonalised results above) you get a series of websites that involve me and I am very proud of that fact (give me a round of applause!!!).  Whilst I am particularly happy that if you type in my name you get to see my blog first (and second) for the simple reason that this is the method I use to promote myself, this isn’t so good for other reasons.  What happens if I meet someone whilst in the pub who thinks I am fantastic and wants to add me as a friend on their myspace/facebook/bebo account.  Where is the link for that?  Recruitment consultants – they want that Linkedin profile.  Fellow web analytics professionals – they’ll want the first one.  Twitterers (if such a word exists) – they want the sixth one.

So you can see how just on a simple web page the context of the user is vital to be able to tell what they want to do on a particular page.

As James points out in his article, it isn’t just the person any more.  It is the person’s location.  If you look at things like the Blackberry and the iphone it isn’t just the context of the person it is the location of the person as well.  No longer are we segmenting based on users being at home or work, now they can be on the move as well.  Tamar’s report into the effect on the internet the recent death of Michael Jackson had (RIP – I had tickets for July 15th) states that Google had a massive spike in traffic from mobile devices. Suddenly if we are taking into account the context of the users approach to a site and their location we can take in so much more as well.  Look for example at Twitter.  Are all these tweets above about Michael Jackson really that interesting in isolation.  When I look at twitter (@whencanistop, in case you didn’t already know) I tend not to look at global trends – especially on my mobile – I am more likely to look at what the people I am following are writing about.  Now we have to take into consideration the network that the user belongs in (not just for twitter, but for facebook, myspace, etc, etc).

So because all of this James wants to take a different approach to usability – one of collaborative approach.  I quite agree with this.  Context is difficult often because it can instantly change.  You either have to design for the most valuable segment (use your research and your analytics to work this out) or you have to create something that is so dynamic that the individual can alter it based on their context.  This is really the route into personalisation. I’ve nicked the above picture from today’s bbc website (or any day’s bbc website for that matter) who had an article on creating graphs.  This is a good point of view though – as we move into this targeted area everything becomes increasingly difficult to measure.

What do we do about it?

James in his comments on his post uses the word ‘average’ which is something I hate.  So you’d have to do it the way I like to do things (ok, I’ll do it this way, others will work on averages).  Firstly an average location is meaningless.  An average number of social network connections is meaningless.  We’ll have to come up with new metrics and new ways of measuring them. Can we find out how many friends users have when they pop up on our site from Facebook?  Not really (at the moment), but we can ask them in surveys and so forth.  This shouldn’t detract away from us still measuring what the users actually do.

Personalisation is a real problem though for measurement gurus like me.  We have to not only work out what the user has done (or we’ve done for the user) to their bit of the site before we can look at the data, but then we have to take into account all the crazy possibilities of that action.  Suddenly we are starting to build up individual profiles of users to give them exactly what they want, when they want it, where they want it.

The flip side of this, of course, is all those who don’t want to share this level of personal detail.  How do you cope with them?  They’re not logged in.  Do you create one massive profile for a person called Everyone Else?  And then how do you measure that and improve it.  I think that those clever people at Omniture, Google, Yahoo!, CoreMetrics, Webtrends, etc are going to start having their databases even bigger to hold this information and it is going to have to be more malleable to pull out reports.

I for one am very excited about the prospect (if not the hard work involved :))

3 Comments on “Web Analytics is dead”