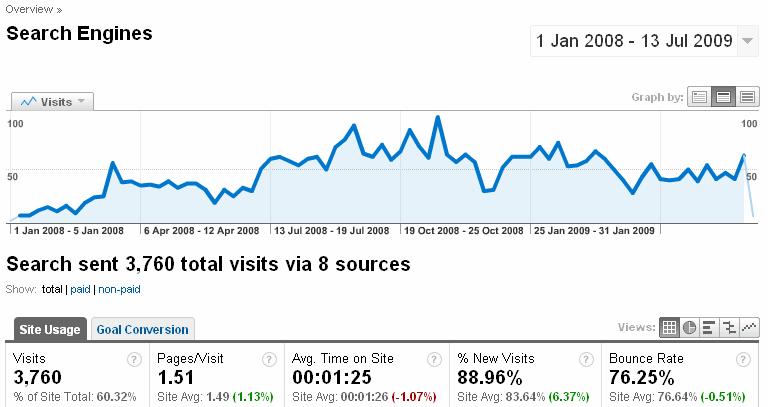 Every now and then I write one of these posts that talks about the traffic to my site.  It’s great because it means I can sit around and play with Google Analytics and come up with new bits of information that help me write my posts.  In theory.  In practice, I end up writing the same sort of things every now and again (like a post describing the traffic to my own site).  So lets start with some recently noticed trends that I have.

Does the above comment really hold true?  I was getting a bit despondent recently because I’d noticed that my search traffic had dropped a bit from the end of last year.  I don’t remember changing anything particularly at the beginning of the year, but maybe I’d dropped off a few links here and there.  Then last week it hit me.  The week before last I wrote a post on the Thursday entitled ‘Web Analytics is dead‘.  Normally when I write a post I get an initial surge of visits.  Not on this occasion.  In fact, I didn’t really get anything until Monday when Sandra Elliot commented on the post.  Then suddenly my search engine traffic shot up: That was a bit odd.  Funnily enough it was mainly pointing at an article that hasn’t got any comments on it.  The post on conversion funnel analysis (I really need to write an update on how to do this in Omniture) always gets a lot of traffic from Google: Overall Traffic to my site is down.  Why?

This is actually a fairly easy question to answer.  Whilst the post mentioned above is quite good because of its generic nature, the posts that have got me the most traffic over time, haven’t really been like that.  Here is my overall traffic for the last 18 months:

It looks fairly terrible for this year, doesn’t it?  I mean, it dropped in April under the 300 mark.  Which brings me to the next point.  If you look at how often I post, then it should be perfectly clear.  I’ve dropped from doing 4 posts a month (March and April 2008 were unusually high) in the beginning of the 2008, to 3 a month at the end.  Now I’ve dropped all the way down to 2 a month.

Part of the trouble is women, of course.  Well one particular one who has taken up more of my time (for which I am very grateful and I wouldn’t swap it for anything else).  Another part of the trouble is the new company and what I am and aren’t allowed to say about them.  Nonetheless the facts are there, fewer posts = less frequently updated = fewer visits.

Another reason that this is important is that posts that started with a shed load of traffic, have started decaying their traffic slightly, because they are losing relevance.  Nobody cares about Omniture buying HBX.  It’s old news.  HBX isn’t really used that much any more at all.  Look at the graph:

Other posts I’ve written have gone down a similar route because they aren’t relevant any more.  I’ve written 21 posts about HBX.  I’ve only written 16 (if you include this one) about Google Analytics and only 9 about SiteCatalyst.

The other downside of not posting so often is not so much traffic from direct sources – those that come frequently to the site expecting updates have not seen it.  Hopefully those that still have RSS feeds will notice that I do occasionally post something:

And finally, I’ve been pretty lazy myself recently regarding posting on other people’s sites.  This is partly because it is very easy to engage with them directly using Twitter (@whencanistop).  It is also partly because I have been a bit lazy when it comes to my social media marketing.  I haven’t been playing around trying to increase traffic from Digg, Slashdot or any of those other methods that seemed to work so well in the past (for a short space of time): What can I do now?  Apart from anything I need to persuade myself that the girlfriend can live without me for a while.  That should encourage me to post more often.  I think I need to get back into the habit of commenting on other blogs and I need to start looking at what I do on Twitter, etc.  Any other suggestions are welcome.  Remember though that I am looking for value here, not just visits.  Otherwise I’d have put up naked pictures of Paris Hilton or whoever.