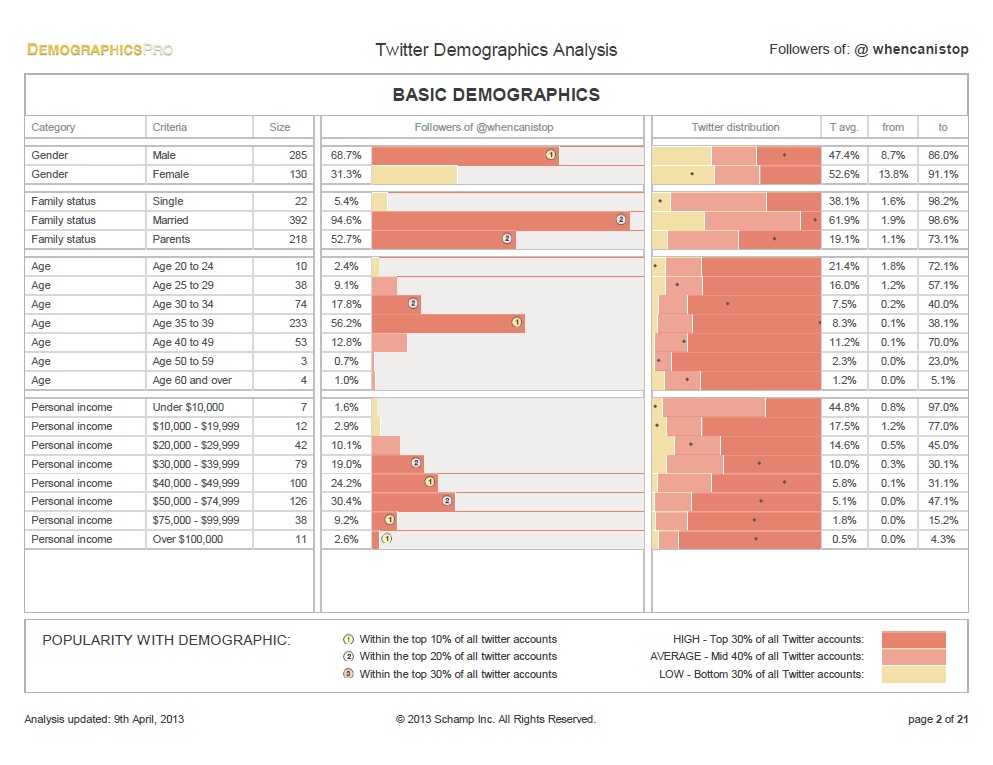 When I got an email in my inbox from Schmap the other day about a new tool they had released I thought I was going to leave it sitting in my junk box. In reality I sent it around the office to everyone telling them about it and asking if they had any clients who might want to use it. We probably won’t do, because of the nature of most of our clients (they work in regulated markets with few twitter accounts). But you guys could be interested in it, if I tell you what it is and how it works.

What is this new tool?

Demographicspro is the name of a new tool and was launched last week. The tool costs money, but not very much – if you’ve got a tiny account like mine then it could cost about $20 for a one off analysis, in fact if you’ve got anything up to 10,000 followers it will cost as little as $80 for a one off analysis. You can, of course, buy a plan for regular reporting to show how your demographics change over time.

How does it work?

The company says it uses algorithms to crunch proprietary data across four general focus areas — network, consumption, language and physical appearance — though it doesn’t say where it comes from. At any rate, it’s better than what Twitter offers brands today, and it spits all of this information out into your choice of an Adobe PDF report or Microsoft Excel spreadsheet.

says Andrew Nusca over at ZDNet. Translating this into English it means that they use meta data about tweets (if you say where you are or what tool you are using, for example), information in the tweets themselves and any information entered into the profile of the twitterer.
My guess is that there are a number of standard things that if you put in a tweet relates you to groups of demographic information – use of hashtags, use of language in tweets, etc, etc.

What data do you get?

I’ll give you some information about my Twitter followers (@whencanistop, in case you didn’t know!), just to get you started. Here you can see some information about my followers that shows their gender, marital status, age and income. In the middle it shows what percentage of my followers fall into each of the demographics and on the right hand side it shows the entire twitterati.
The most important bit of information on the chart is that little black dot on the right hand graph. It shows you how you compare to the entire world. The further right the dot is (in the dark red) the higher the representation that group presents of your followers compared to the average. anything that is on the far left in the yellow is much less represented.
My followers are more likely to be male (this is hardly surprising in this industry), more likely to be married and/or have children than average, in their late 30s and high earners. If that describes you and you are a follower, well done. To give you a quick flavour of some of the other bits of information you’ll get, above we have some information on the location of the followers, what the interests of followers (77% are interested in technology – I think that someone could do with breaking that large group down a bit in future developments) and what occupation the followers have: Is it any surprise that so many are into ‘Sales/Marketing’ (does ‘Sales’ as a job even exist any more? And if it does, these people are surely really different from Marketing people that it isn’t worth grouping them). It is nice to know that I’m also connected to a lot of Senior Managers – that should make it easier to sell my services over Twitter (although I do use my twitter solely for professional purposes, so maybe it isn’t so much of a surprise). These bits of information are probably found from various bits of data about check ins, tweets and generally linking demographics of people to the demographics of the sorts of brands they like. Here it is more important than ever to look at the dot to see where you sit compared to the global audience. KFC appears high on my list, but my users are far less likely to like KFC than the whole world. Me tweeting “@KFC, isn’t it great! #chickenforlunch” probably wouldn’t go down so well. Finally we have some information about how long these people have been on twitter, how many followers they have, how many they follow and their daily activity. Knowing how often my followers tweet gives me some insight into how often I should be tweeting too (my first tweet was just over 5 years ago and I’ve tweeted almost 1,500 times, so once a day makes sense).

How can a Brand use this data?

I see there being five ways to use this data:

Remember though that your overall twitter strategy should integrate with your overall strategy and should drive real world outcomes. You get data from this tool and you need to analyse it to get insight that you can use to change stuff. You then need to use your standard measures to show the impact of these changes. You can start using this data as part of your metrics, of course, and run this analysis on a regular basis.