What should managers do with their Analytics function? 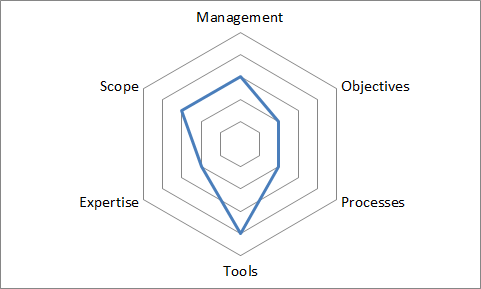 Whilst at Measure Camp a couple of weeks ago I attended one session entitled ‘Does anyone outside this room care about Web Analytics?’ At it, I posited that many people’s dissatisfaction with organisations was just a misinterpretation of a maturity model put forward by Stephane Hamel: they were actually just seeing the impact of deficiencies in other areas and that managers were getting the brunt of it. I was, however, rebuffed on this somewhat. Whilst discussing this in the office a couple of days later I realised the reason why. Managers would not be doing their job properly if they were the most advanced of all the disciplines.

So here we have the big guide to how you should manage analytics if it is your responsibility. Previously when talking about the maturity model, I did a post on the sorts of things that I thought you should know if you were a Web Analyst. The model takes six facets of analytics that would lead an organisation to be able to optimise in the most efficient manner. You then work out how mature you are in each area, on a scale of 0 – 5, and it leads you into a little graph like the one above. If you are equal in all areas then you are optimising in an efficient manner, but you could be getting better value for your money by being more mature. If one of your arms is more mature than the other then you will be wasting money by not being able to use it to its full potential.

The classic examples are: buying a tool that is all singing and all dancing whilst not having anyone in place to look at the data; or not having the processes in place to enact the recommendations that your tool and experts recommend because you need to wait 12 months for the next development cycle.

So what are the six facets?

You as a manager should work out where you are in each of these sections and then evaluate your own presence too.
You should always try and be even in all areas and you as a manager’s job is to ensure that you bring each of the other areas up to the appropriate level.
But equally as a manager you should know that you shouldn’t waste your time fighting battles that you’re not going to win and transformation frequently is one of those. Therefore as a management team you should ensure that you are equal lowest of all of those.
I’ll repeat that – to be a good manager, if you have hold of analytics you should be equal worst in this list.
This is the reason that so many analytics people end up complaining about management. It isn’t so much that management are holding things back, it’s that they know if it wasn’t them, then something else would be the road block in an almost identical fashion.
So you’re a manager and you want to work out where everything is on that scale. How do you do it?
Is the ball in your court? Yes, because you’re the one in charge of analytics. Don’t expect it just to happen.

1 Comment on “What should managers do with their Analytics function?”