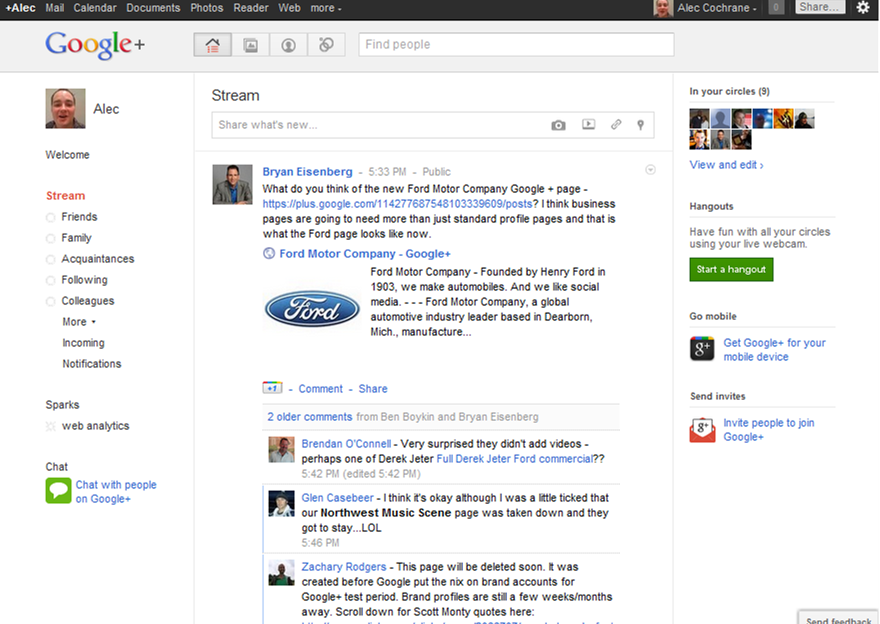 The big news of the last couple of weeks is the launch of Google+. Or should we be calling it G+? Or Google Plus? The fact that nobody quite knows what to call it is just adding to its allure. Well it is for me anyway. So what is going to be the impact of Google+? Well lots of people are talking about its impact on Facebook, but I think we need to look elsewhere.

What is Google Plus?

Google+ is being described as the Facebook killer and the similarities are there for everyone to see. It’s a system whereby you add ‘friends’ and then you share updates, pictures, links, locations and videos about yourself with your ‘friends’. It even looks remarkably similar: All you really need to be able to do is to invite all your facebook friends to Google+ and you are away.

Then when your ‘friends’ post updates, pictures, links, locations and videos about themselves and their ‘friends’ you can comment on them to create an interactive experience.

Well Google is telling us that the unique selling point of Google+ are circles, sparks and huddles. Of course none of these are particularly unique to Google.

Google Circles may be the most unique part of Google+. It is a very simple system that is actually in Facebook (lists allow you to filter your wall and you can use those lists to publish updates to groups), but wasn’t there at the start. Essentially they are a system that allows you to put your ‘friends’ into groups that you can choose to share updates, pictures, links, locations and videos. And of course it works vice versa, you can choose what you want to read about other people depending on your mood.

Google Sparks is effectively a way of creating a news feed of updates about particular subjects. It’s a way of getting Google News with a bit of personalisation, as far as I can tell. Google Huddles is a way of creating conversations in a very similar way to facebook chat. As with the new chat you can do it with multiple friends, although I can’t quite work out how to do it online and offline.

Of course from this point onwards it is a very short step to be able to get your gmail and Google+ linked together, something that Facebook has not been able to do (despite Microsoft attempting to build integrations – Hotmail and facebook allow you to export and import contacts, but it isn’t truly integrated).

The other interesting thing about Google+ is that it is in the navigation bar of every single Google page. You can’t avoid it. I’m logged in when I’m searching, when I’m in gmail (if I had one), any time I’m sitting on a Google.com domain in fact. Half the people in the web are going to be using it all the time.

What about Google Plus one?


What I see next for Google+ is the integration with Plus one. Funnily enough the introduction of plus one, Google+ and the Panda updates have coincided quite well.

The Panda update for those of you who are interested was an update to the Google algorithm that pushed websites down the search engine results that were a bit spammy. However more than being spammy, they were sites that would take other sites content and conglomerate it into one big site. They would then create lots of interlinking between pieces of content to help them push up the rankings. The idea was that they didn’t produce any new content of value, so they shouldn’t be high up the rankings.

So what is Plus One? Well Plus one is a new way for Google to allow you to promote particular domains higher up in your search results. Because I have plus oned my website, it will now appear higher up in search results than it would do normally. It’s a clever way of allowing me to choose what sort of results I want to see in Google.

Of course, everyone else that searches and has my blog appear in search engines will also see my plus one. It’s clever like that. Having seen that someone has promoted my website in search results, it might meant that you are more likely to click it because it has been endorsed.

You’re going to start seeing it more often in your search results.

Incidentally, if you login to your webmaster tools, you can find out how many people have plus oned you.

Google Plus One and Google+

What should SEOers do about Google+?

So if the things at the top of search engines are going to be what individuals want to see, we’re definitely going to be in a new movement. It wasn’t that long ago that websites started making you ‘like’ them on facebook to let you see them. I think initially this is going to be what websites will try with Google Plus One. I don’t think it will work though. It is too easy to take your plus one back again and won’t give you the commercial gain. Plus we’ve seen no evidence that the website will get any user information to market to in the future with a plus one as opposed to a like.

So how do you get the plus ones? Inevitably it will be in the usual ways of making your content relevant, interesting and informative. The best articles will be promoted in the same way they are now, but the results will be less generic.

The number one thing that SEOers are going to be insisting on is a Plus one link on every article though. Now how do I get one on this blog…

PS – I’m on Google+ if you want to contact me. Once I’ve worked out how to get a page for my blog on there as well, I’ll update this post.