Microsoft Analytics has had an overhaul 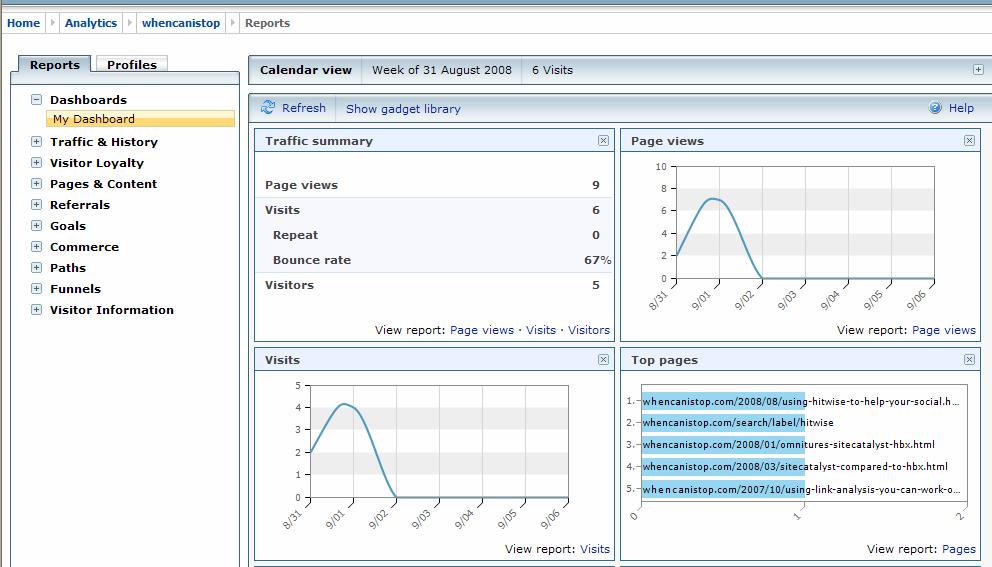 I suppose the biggest change of all has to be the addition of the dashboards feature.  Something that you probably need to think about first when it comes to analytics (because that is the bit that encourages you to delve deeper down).  And with the new MS interface, it is fully customisable (which is a bit of a step up from Google Analytics).
Well, I say it is fully customisable, it is just about that way.  You have a preset set of dashboards that you can add and move around anyway you want (by clicking on the ‘show gadget library’ at the top of the page, which is not immediately obvious).  I’m hoping that they introduce a feature similar to HBX where you can add any particular report to a dashboard.

The next area of improvement is the introduction of path reports.  These are very clever as they will allow you to work out how people navigate through your site.  More importantly, they’ll allow you to do a couple of things: Entry page reports are some of the most useful in the business.  They tell you where your users are arriving at your site.  The report that Microsoft have added would have been a bit more useful if they’d had the bounce rate on this as well (although you can still get that info from the pages view, which breaks your content down into groups based on the url structure).  You can of course, get the same exit page reports.

The main USP of Microsoft Analytics was always that they could conjure up all this data about you from your .net passport.  And this has now been introduced into more of the graphical reports.  Last time I noted that I like the tree map view as a new visualisation technique.  Now they’ve added the ability to segment by your tree map view by each of these segment (age, sex, occupation).  There does still seem to be a lot users on my site that aren’t logged in (see the chart below), but I think having this data does give you that extra little bit. Overall a few nice improvements that they’ve made.  I’m looking for them to continue to update this to try and compete with Google.  I do also think that they’d benefit from encouraging people to blog about using it – there are hundreds (if not thousands) of Google Analytics blogs, but few about MS Analytics (bar their own).  Don’t ask me how they do this (maybe they need to employ an evangalist like Avanish Kaushik did for Google).

2 Comments on “Microsoft Analytics has had an overhaul”