Conversion Funnel Analysis: When, How and What 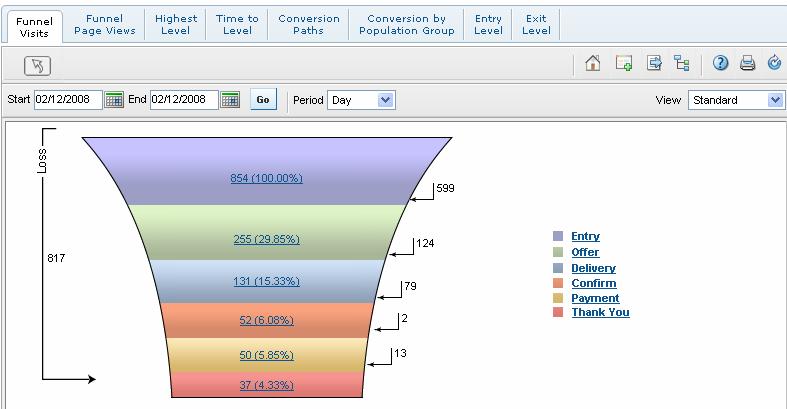 EDIT: This post has proven popular, so I have done an update on how you can use Omniture’s Fallout reports to put some of this stuff in practice. End EDIT

Actually, the presentation whilst spawning this blog post wasn’t actually about funnels, but I think that maybe it should have been. I’ve never really used them in Google Analytics, but this doesn’t mean that you can’t follow the process and I think that this will give you some ideas on the situations to use them. Don’t worry though, given the current way of the internet, the funnel is not dead.

Lets start at the beginning. Back in the day people would use funnels to work out how their site was performing. Web Analytics companies realised this and created fancy software that would allow you to visualise your funnels. Essentially they all do the same thing. You work out how much you put in the top and how much you get out the bottom. The more you put in the top, the more you’ll get out the bottom. If you create steps in your funnel, you can work out where you are bleeding visitors and then you can look at those areas as places to improve to get more out of the bottom without putting more in the top. Here is how HBX’s conversion funnel Analysis looks: This is a good example of where you can look at the steps in a process and work out which steps need the most attention, before piling more visits into the top. Essentially most funnels will look like one of the following four:

You want to lose as few people at any point in the process as possible (not always possible) so you end up with a ‘Shot glass’ effect.

However this approach only works if you have a defined process that all users must go through to complete their transaction. In modern day web this isn’t always the case. No longer are your users arriving in at the home page before searching for their product, before adding to a cart before going to checkout and then buying.

Now users arrive in all sorts of various places. They move around the site in between pages. They use tabbed browsing. They go off and make a cup of tea or answer the door and get timed out so retrieve their position from your clever front end.

When should you create a funnel?

You should create a funnel if you have a clear goal that you want your user to make. If this involves going through a series of forms, then this is better. Don’t be worried that because your goal is not selling something, you can’t create a funnel.

Think sign up funnels. Think lead generation funnels (eg filling in a form with their details). Think downloading a pdf. Think applying for a job. Think anything where your users are going through a process to sign up.

How should you create a funnel?

The first thing that you need to do is work out your site. I always find a piece of paper and a load of boxes work well, but you can turn those into funny diagrams. This is a real visualisation effect that although you may have in your mind, you probably won’t have on a piece of paper. Work out the process of the steps and draw them as boxes one after the other with interconnecting lines, like you would in a flow chart. If there is a point where you can go one of two ways – show this in your diagram. If there is a point where some users may view an extra page, show this in your diagram.

You should end up with a flow chart with some clear steps at the end towards your goal and some fuzzy ones at the beginning like Stéphane does in his blog.

Work out the visits to each of those pages (or groups of pages if you have them like that). Jot them on your piece of paper.

Don’t forget on your diagram to include the pages (groups of pages) where a user can jump deep into the funnel.

What should you do with your conversion funnel?

For each level of the diagram work out how many visits have not moved on to the next step ([step 1 visits]- [step 2 visits] – [step 2 entries]). These visits that didn’t move onto the next step are what I like to call ‘drop offs’. They didn’t carry on in the journey. They may be more or fewer than the number who exited the site at that page.

Now you have a nice flow diagram that looks a bit like the one that we got out of HBX (which are really easy to set up), but also contains information on who joined the process in mid funnel and who exited in mid funnel as well as the visits to each stage.

Note this funnel carefully. You’ll lose people at an early stage of the funnel. This isn’t uncommon. You might find that you gain a load of new visitors at a later stage in the funnel (they jumped in the middle from external sources of from within your site), which you had previously lost. Or that you lose a load of visitors on step 2, but then on step 3 you get a whole load of new ones – however if you had used a HBX funnel you wouldn’t see this (because you can’t jump in mid funnel) and you wouldn’t see this if you just looked at visits to each step (because you wouldn’t see losing loads of visitors and getting the new ones).

Use this to prioritise where you want to work to increase your conversion. Focussing on landing pages may not be the best place if you have a small percentage drop off for that page. Focussing on areas further down the funnel will not be good if everyone gives up after the first page.

More importantly try changing a few things and seeing the effect it has on the funnel. You might find that changing something at the beginning causes more people to drop off at the end as you have just moved the bottle neck. There is nothing better than trending something over time whilst you make changes.

1 Comment on “Conversion Funnel Analysis: When, How and What”