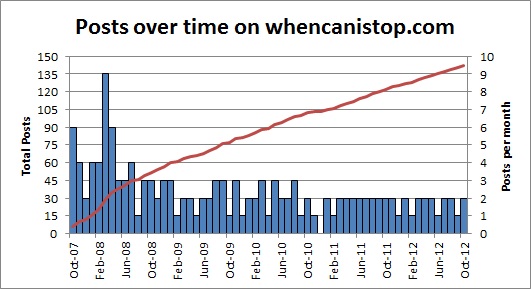 Every year I produce a blog post pointing out how brilliant I am at blogging and this is that occasion this year. That’s right, I’m congratulating myself on my ability to write a blog for five whole years. You know what? Blogging is hard. That’s right, I’ve said it. I put a lot of hard work into this blog on a regular basis and that gives me the right to congratulate myself on a yearly basis and if you don’t like it, tough. This blog post is about me.

Although in reality it isn’t about me at all – this is going to hopefully provide a world of wonderful insight about what you read. I might spend hours writing this stuff, but over the course of 5 years almost 30,000 unique visitors (that’s you) have contributed almost 37,000 visits. Well done you. You’re not that unique at all.
So I also congratulated myself on my 4th birthday and I congratulated myself on my 2nd birthday, so I thought I’d do some similar things in this post as to those.
So how have I been doing in terms of writing posts? Well this is where I hang my head in shame a little, because the aim is two posts a month and you’ll see from the graph below and the left hand menu with all the posts that I’ve missed a few months out. This month now says three (assuming I posted this before I went to bed!), but two in November and December will take me up to twenty two posts a year for the third year running. Bad Alec.
That said, the number of visits has been going up. Hurray!

Yep, that nice little line at the top of the chart shows that in the past year the number of visits was above one thousand for six of the last twelve months and overall visits were up by 20% on last year. Huzzah.
The aim for next year has to be a thousand visits a month every month, but that does mean that I need to keep writing two posts a month.

Rather than spending hours talking about where my visits have come from (which I do regularly anyway, because I talk about SEO, marketing and the like all the time), I thought I’d just do a generic graph showing that most of the visits are still coming from search (the blue line). The orange line (direct) and the green line (referrers) are about the same and a bit more volatile. They haven’t really been going up over time, so I’m really at the mercy of Google. That’s ok though, because I think I write enough informative posts that I’ll always get visits from them.
What I thought I’d do this time is talk a bit more about my top content. These are my top five most visited posts:
On the face of it this looks a terrible result for me. The most viewed posts are from ages ago – has nobody been reading my newer posts? Have I been wasting my time writing posts ever since October 2010?
Well it’s not quite as clear cut as that. What you are about to see are some charts showing where the the top 10 most viewed posts in each of the five years appeared in the ranking of the other four years. The next year was even worse! Only one of the posts that were in the top ten in 2008/09 wasn’t written in the 2007/08 period! That graph at the top where you see 2008/09 traffic shows that things didn’t go to well. Bizarrely that post that was new in this year’s rankings (learning to use SiteCatalyst) has been in the top 10 of every subsequent year and is now the third most viewed post of all time! In 2009 things were much better, I wrote a lot of posts that got visits. Seven of the top ten posts of 2009/10 were written in that time period and only three of them were written in previous years! This really was the golden age of whencanistop. Three of the top five of the overall top posts were written in 2009/10 and October 2010 is still the most visited month of the year. 2010/11 was a different matter again, only one of the top ten posts was written in that year. One of the most viewed posts (EU cookie laws verified) was written in July 2010, but only gained traction towards the end of the year due to a link in an eConsultancy article I guest wrote. But on the flip side, the scale of my left hand menu shows that out of the top ten posts, all of them were still in the top 40 the following year. So finally I thought I’d show you how my visits to posts breaks down by the year that the post was written: Now you can get an impression of why the traffic to this site has grown over the last twelve months. I write a series of posts that gets more visits, whilst the previous posts continue to gain visits by being indexed in search engines. This effectively justifies my decision to make longer blog posts as opposed to shorter ones. Long may it continue.