2011’s Predictions Revisited – How Wrong was I? 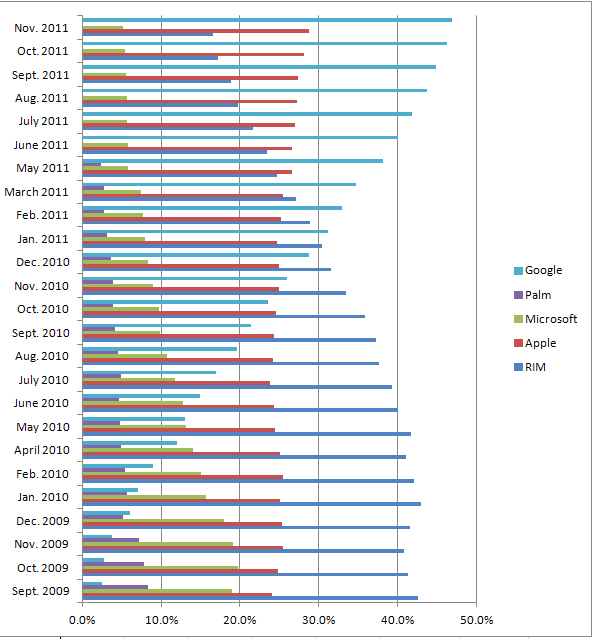 At this time of year, it is traditionally that people write their predictions for the year coming up. They usually make a series of bold claims that subsequently start to look ridiculous or they make a series of claims that are so mind numbingly obvious that everyone gets bored after a couple of seconds. Of course the next year nobody bothers to check on their predictions to see whether they were wildly off or particularly astute. Given that I did the wild predictions last year, lets revisit those claims and see how stupid I really was.

1. The Fall of Google

This is going well already, isn’t it?

So Google didn’t fall last year at all, in fact, it went from strength to strength. It is still the number one visited website according to anyone that matters (Alexa, Compete, Comscore, etc).

But it hasn’t all been going Google’s way. Why did I think that it would be their downfall last year? The reason I thought was spam. Particularly I was looking at spam that was ‘user generated content’ within affiliate websites. Sites which offered ‘reviews’ to give value add, which were becoming increasingly nonsense and no use to the user at all. I thought that users would soon start switching off because of this.

However what I didn’t foresee was Google making some major updates to the way that the algorithm worked:

So Google certainly haven’t been quiet this year in making sure that my prediction hasn’t come true. One could argue that they’ve made themselves much, much stronger than they were in the past (which was pretty damn strong).

2. The Death of Online Newspapers

So it turns out it wasn’t the death of online newspapers. The MailOnline hit 80m unique browsers in a month in November 2011. This is up 73% on the previous year. The Guardian was up 59% and the Independent was up 36%. So how did they do it?

Well the Mail decided that rather than being niche it was going to go as mainstream as it possibly could. 55% of their unique browsers now come from outside the UK, although 67% of their page impressions come from inside the UK suggesting that they are attracting a lot of people who are just floating past (probably through search). This is a pattern that is matched at the Guardian.

So maybe some more newspapers have gone behind a subscription model? Well if anything it has gone the other way around. The News of the World was News International’s attempt to see if it could make a tabloid work behind a subscription model after moving the Times there. Unfortunately that experiment went by the wayside as they were forced to close amid a huge hacking scandal that hasn’t quite reached its zenith yet. It remains to be seen whether the Sunday Sun will follow the same route when it arrives.

I’m on safer footing with this one at least. This was an important year in mobile application building for one big reason. The big reason is that Adobe decided that they weren’t going to update their Flash for mobile browsers. This doesn’t sound like a particularly exciting move to the average bystander, but it has far reaching implications.

Firstly this is an admission by Adobe that they’ll never get Apple to have Flash in Safari on the iPhone, therefore missing out on one of the biggest markets in mobile. Notably they are going to continue to help developers with Flash on applications.

Secondly they are going to start helping developers work towards developing for HTML5, which is standards compliant. This means that as mobile browsers get more sophisticated they will be starting to show what is on the actual web page, rather than developers having to code for different devices.

It’s an interesting move because the shift in the mobile world is a significant one at the moment. The growth in the Mobile market over the last twelve months has been to Android:

Android of course being open source means that you can develop any applications you like for it and do whatever you want with it, including creating new browsers. My current browser of choice on the mobile is Dolphin.

4. The boom of use of Analytics tools

Last year at this time I said that there were 94 jobs in the UK for Web Analytics on Total Jobs. This year there are 119. Is that evidence of an increase in use of Analytics over the last year?

There was a continuation of the acquisitions, most notably as Adobe started buying companies that not only had technology, but also did consultancy. Google also introduced a ‘Premium‘ version of the tool, which you can pay for to get support.

Who knows what will happen, but the industry is facing a major crisis in the coming year. As the rest of the world watches, Europe is introducing new regulations on cookies as the US watches on. If the US follows the EU example then it could well spell the end of Web Analytics as we know it. If the EU experiment fails then we’re likely to find hundreds of US websites flooding the area that the EU companies lose competitiveness in.

Certainly it is an interesting time to be part of the industry! It’s make or break time.