Alec Cochrane Posted on January 16, 2008 Posted in Hitwise No Comments 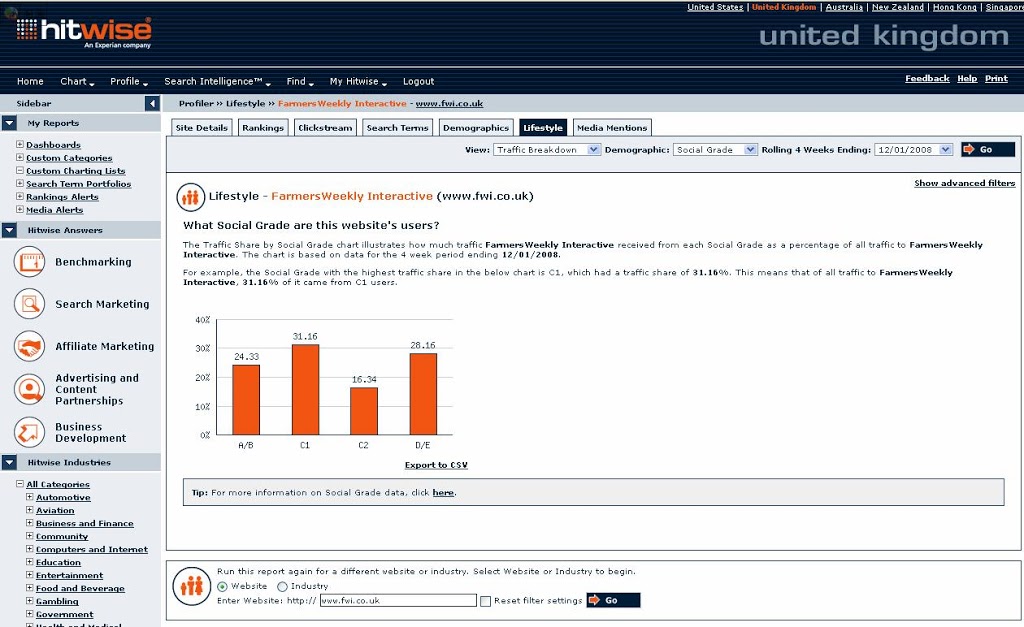 We’ll continue in the theme of Hitwise after last week’s 6 tips. This week we are going to go into some of the other features of Hitwise that allow you to do some demographic and lifestyle based queries on yours and other sites. I’m also hopefully going to go into a bit more detail on it and hopefully it will show you some of the uses that you can get out of it after the wow factor.

Hitwise has developed proprietary software that Internet Service Providers (ISPs) use to analyze website usage logs created on their network. The anonymous data sent to Hitwise from the ISPs include a range of industry standard metrics relating to the viewing of websites including page requests, visits and average visit length.

Ok – what that means is that as well as having huge volumes of data about which sites each of the users have, they can also start doing some investigation into the location of the users. And if you know the location of a user then you can start running all sorts of socio-demographic reports. Also because of the way Hitwise queries the ISPs logs, they can also extract information based on the bill payer for that particular usage giving it huge volumes of demographic data.

Firstly lets look at how Hitwise looks at social grading. I think there is a fairly accurate description of it on the wikipedia page, but I am going to give you a shortened version. People in social grade A are posh and people in social grade E are vagabonds and B, C1, C2 and D are everything in between. That’s a bit of a simplification, but essentially your social groups of ABC1 (not the American television channel) spend lots of money and those in C2DE don’t.

Your website will have a combination of ABC1C2DE users. You can have a look in Hitwise (it groups A/B and D/E) – below is FWi Wow – look at all those D/Es. We’ve got loads of them. The first question someone would say is “why do we have so many of them?” and “Can we get more of those lovely A/Bs please?”. That may be true, but you have to look at this one in context. Firstly these figures on their own are meaningless. You need to firstly compare to the online audience – do we actually get more than the online audience does (use the ‘swing comparison’). Well in this case the answer is still yes, but it gives us a much better picture. Whilst our site is more D/E than the online population, it’s actually a bit more A/B than the whole online audience as well.

Remember that much of this information is based on post code and we are aimed at farmers. “But so are our competitors!” I hear you cry. Well exactly, lets try comparing it to our ‘Agricultural’ group rather than the whole online population and suddenly we’ve got far fewer D/E’s than the total population and the C2 category is much higher. That’s far more likely – C2 included agricultural workers and that is where we are aimed at. In fact, we have more of these C2s than our nearest competitor as well when we went to a more advanced swing comparison.

So what can you do with this I hear? Well firstly you can use it to help sell your on-site advertising. If I’m going for a general advertiser that isn’t going for my market, telling them that according to Hitwise we have more A/Bs than the whole population. This should make my site far more attractive. If we’re doing more bespoke selling then we can point out to, say, John Deere that we’ve actually got a bit grouping for the agricultural workers. They are the ones that they should be focusing on and we have them. Spend money with us.

Ok – now we are getting somewhere but this isn’t anywhere near enough info for advertisers. Can we go deeper? Well yes – this is where the mosaic lifestyles come in. Mosaic is a split of all users based on where they live into 11 (sorry US guys, I know you have more over there) groups of people who range from A – K. Have a look at this pdf, it briefly tells you about it. Here is FWi’s:

Do you see that nice big spike at the end? That is mosaic group K. Mean anything? No – lets add some context. Mosaic group K is the ‘rural isolation’ group. It tells you about them in that pdf back up there. The summary of these people is that they who live in the country side, that has predominantly been farming in the past, but is starting to get picked up by commuters. Our users probably aren’t the commuters, but it’s interesting to see what they are interested in (look at the photo in the pdf). Again it is useful here to compare to the online audience because it turns out we’ve actually got a bit more C (Suburban Comfort) than the total online audience.

Nice info for you to put in a sales pack isn’t it? And actually, just a bit more than that, because it should be giving you ideas for companies that you want to get advertising from – it will give the advertisers higher click throughs and should therefore give you the scope to charge more money.

More detail Alec? Surely we don’t need that much. Probably not, but in this case it gives a nice example. Our Ks in this example are sub split down into more detailed K57 – K61. They relate to:

This nice little subset shows us that really we’re not aiming at K57 – these are urbanites who just happen to have a second home in the country. They aren’t interested in Farming and the demographics bear this out – this is less than one percent of our total population. The K58s, K59s and K60s however fit our sites target ideally. They are wealthy, they are farmers and they probably own their own farm. These are great people to sell to if you are in the farming industry and they visit our site in abundance. Far more than the online audience when we do our swing comparison and far more than the agricultural industry as well.

If you were trying to sell something in the farming industry and did a search on Hitwise to find the most farm-wise community – FWi would be one of the first places I’d go. However the farming industry people don’t have access to Hitwise, so we have to tell them and show them the data.

This tells a nice story about FWi – but all other sites will be the same. Proving to your advertisers that they are better off advertising with you than someone else is difficult. However if you have these tools then it can really help your sales pitch.